My previous posts were rather in-depth and heavy with references. Hence, I’ve decided to do something a bit lighter for a change. Today’s post will be on food, which is no total coincidence, as I’m attending an Alan Aragon (https://alanaragon.com) seminar on nutrition this weekend. Just came home from 9 hours of lectures.

I’m currently in the process of making weight for the NMAC Battle of Vienna. I’ll be competing for the first time in quite a while under a limited MMA rule set. I compete I the -70my division. Weigh I will be on competition day, so I can’t cut a lot of water weight. This means I have to make smart use of my nutrition skills to get down to something around 72kg and then cut the last 3%. Currently, my intake is at 2000kcal.

On this occasion, I thought I ‚d share some of the recipes that help me get through the day, perform at an acceptable level and retain as much muscle as I can despite my hypocaloric diet.

Now this might seem like a shameless plug, as I am the official Legal Cakes (http://www.legalcakes.at) distributor here in Austria, but I really eat those a lot. You have to understand the trainer’s lifestyle in this context. I’m essentially a modern day nomad. On some days, I teach classes in three different locations across Vienna, then go to a fourth one for my own training. My nutritional choices are rather limited on such days. I could resort to intermittent fasting (and have done so extensively in the past, living on the Warrior Diet for six years), but at this point in time, that just doesn’t work for me. At today’s seminar, Alan Aragon laid out his ten commandments of a healthy diet. Point 6 was named „convenience“. Snacking on bars just fits my current lifestyle conveniently.
At roughly 23g of (whey) protein per bar, these delicious little buggers really help with muscle retention. At 130g of total weight per bar, they’re not even that little,either. 244kcal is rather reasonable as well. 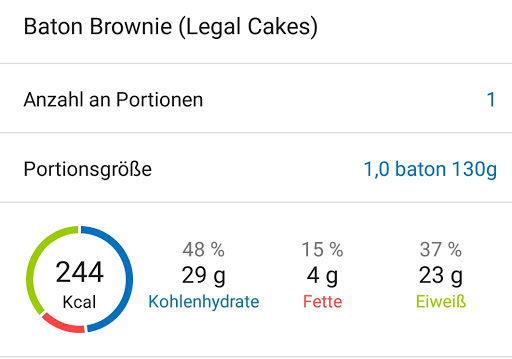 Talk about convenience. When I return after a long day, I’m not always willing to cook anything fancy (although I pride myself in having a very well equipped kitchen). One bowl are very handy in that regard. Basically, in a one bowl meal, you pick a protein source, a carb source, a vegetable and a topping, toss it all in a bowl and cook it.
I usually pre – cook my protein sources in bulk. My George Foreman 12 serving indoor grill comes in handy in that regard. Chicken offers a ton of protein at low fat and practically no carbs. No wonder it’s a bodybuilding staple food. As for carbs, I like to use different types of grains. Probably due to my heritage, I particularly love buckwheat. Like quinoa, that’s actually a pseudo-grain that’s gluten free and high in protein. As for veggies, broccoli is my first choice. Variation, of course, is important – but man is broccoli awesome.

Skill level: Easy.
Preparation time: ~10 Minutes
Cooking time: ~15 Minutes
Ingredients:
Grilled chicken breast, ~200g (one standard sized chicken breast)
Buckwheat, 100g
Broccoli, 300g
3.5% Fat Yoghurt 100g
Preparation:
1) Grill the chicken (preferably in advance in bulk) and chop it up.
2) Cook the buckwheat in boiling water for 10 minutes.
3) Steam the broccoli for about 6 minutes
4) Combine all the ingredients in a large non-stick pan or skillet
5) Add the yoghurt, along with spices of your choice, stir and heat for 2 minutes

Here’s a fast and tasty one for breakfast. Takes just four ingredients (three if you, like me, leave out the baking powder). As all the recipes featured here, it contains more than 20g of protein, hence hitting the Leucine threshold and maximizing muscle protein synthesis. Also, it contains just enough carbs to get you through a morning training session. I despise doing work that has already been done, so I’ll just post the link to the original recipe and give traffic where traffic is due. Check it out here: http://www.thecreativebite.com/light-fluffy-banana-protein-pancakes/

I’m Precision Nutrition certified (www.precisionnutrition.com), so it would not been proper to leave that out of this article. PN published an awesome Super Shake guide (https://www.precisionnutrition.com/super-shake-creation), as shown in the above infographic. Using this blueprint, I designed my basic banana shake. Super simple to make and filled with essential micros.

Putting it all together

There you have it – a breakfast, snacks for the day and a quick & dirty dinner. If you’d eat exactly that over the course of a day, that’d provide you with around 165g of protein and roughly 115g of carbs. For me, that’d still put me in a rather severe calorie deficit as well.
So much for my recipes today. I’d love to read about your preferred fat loss recipes, so don’t hesitate to post them to the comments section below. I’ll probably be doing more articles in this series, so stay tuned.
So long, don’t get hurt