My first opponent at the WKF Austrian Open 2012 was Alfredo S. from Venezuela. It’m been one of very few times that I faced a fighter who wasn’t taller than me. Competeing in the -71kg division (rather than -75kg) definately is a good idea for me. Granted, there’s still a lot of tall guys around at that weight, but then I’ll always have to face that challenge, regardless of style and division. All men are simply not created equal.

Anyhow, Alfredo displayed a rather unorthodox style. Don’t get me wrong here – he’s not a bad man, by any account. (On a sidenote, he took gold last saturday at the national championships in his division.) His stepping was just unline anything I’ve encountered so far. But then that’s not exactly true, either. Felipe, one of my students, moves in a very similar fashion. I guess that’s just the latin american genes showing.

Since the fight was under light-contact rules, I decided to make heavy use of the lead leg. When every hit scored, regardless of effect, this is a good way to control the ring. Alfredo tried to deal with that situation by moving sideways a lot and rushing me whenever he saw a chance. Basically, that strategy could have worked – however, in the heat of battle, he often put his head down and seemed to lose orientation a bit. On most of the exchanges, I was able to gain the upper hand. 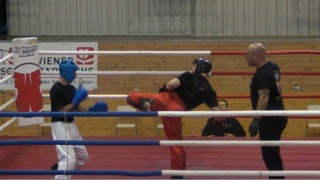 Noticing that Alfredo kept his guard pretty low, I did something I haven’t done in a while – I went for an axe-kick and scored. You see, I used to compete in the -75kg division, where everyone’s just so much taller than me. Now, in the -71kg division, I finally have the opportunity to work some magic with those high kicks I’ve been practicing for so long. Also, kickboxers in the ring tend to hide behind their gloves whenever they see a strike come their way. That’s why axe kicks work better in the ring than on the mat, where you basically can take a step back at any time, thus effectively evading any kick.

Being quite enthusiastic about the successfull axe-kick, I even went for a flying spinning back kick at the end of the first round. My timing was really bad, though, so I missed and hit the floor. In other federations, this would probably result in a warning, but apparently the WKF isn’t that strict in that matter. Later, during the second round, I directly countered one of Alfredo’s attacks with a flying back kick. That time, I connected and sent him down. 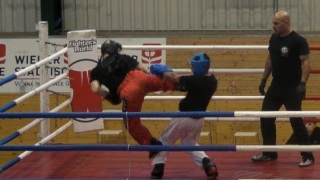 Speaking of nice counters, a couple of seconds into the second round, Alfredo hammered me with a beatifully executed lead sidekick to the ribcage. Probably cracked a rib, judging by how long it caused me severe pain. Good thing there’s adrenalin to keep one going for another round after stuff like that happens. 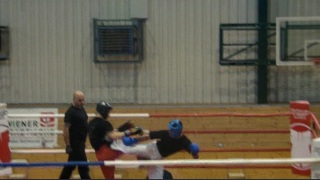 Having said that Alfredo did a brilliant job with that sidekick, I have to add that during the second round, he sometimes got dirty. Started grabbing my kicking leg.  On one occasion, he held on to my leg after I had thrown a kick, and hit my damaged rib with a hook. Sent me straight down to the canvas. That’s fine in MMA competitions and maybe muay thai, but illegal in kickboxing. On the other side, I hit Alfredo in the back of the head when he was turning away from me, which is illegal, too. Also, one of my roundhouse kicks was too low and hit him in the crotch. So, we both commited fouls and none of us has a right to complain.

In the end, although I have great respect for Alfredo as a fighter, I guess there shouldn’t be much of a debate about who won that fight. Just watch the video footage and judge for yourself.

Next up: my second fight that day, the finals, against Yuri, a slovakian fighter. In the meantime, feel free to post your thoughts on this fight in the comments section below. Looking forward to reading your feedback.