I wish you all a happy new year.

For me, the year won’t start particularily good, I guess. On january 7th, the doc will put my foot into plaster again. This time, it’s 4 weeks. After that, we shall see further.

Now on the one hand, this is significantly screwed up. Gone are my plans of doing a max strength program to begin the year. Also, as a professional trainer, not being mobile at the beginning of the year means a serious handicap to my marketing actions. Novembet through February are, after all, the best months for any sports school, finance-wise. Also, I need to make up for all the losses my second studio has produced over the last year anyways. Instead of recovering financially, I’ll now have to pay an instructor to teach my classes. Great.

Not to mention all my plans of offering more classes at my Dojo. They’re most definately put on a halt at the moment.

As you can see, from a business point of view, my situation is short of disastrous.

Anyhow, being the Shinergy fanatic that I am, I’ll deal with that situation according to Ronny Kokert’s idea that „warriors combine the bravery to accept imperfection with the love of the ideal“. This is a word-to-word translation of a german statement, so I’ll rephrase that one. Put into simpler, more fitting words you can say that the basic idea is to „strive for perfection but accept imperfection“. I can’t change things by force, so I’ll just have to adapt and make the best out of the situation. The greeks had that idea in their philosophy of stoicism. Every situation is to be considered neutral, „good“ or „bad“ are just measurements of how one deals with it.

Just to cite some more Ronny Kokert statements here, I’ll give you some more without adding any explanation. If you’ve been following my posts, I guess you won’t need any, anyways.

Ok, now I’ll have to say a word or two to explain my choice of citations.

My body is signalling a need for rest in the most obvious fashion. As it is my primary goal to be fighting again, I need to obey it and rest some. This is a defeat, but then it’ll do me good to be actually resting for those 4 weeks, considering the additional benefit of disencombering my knee as well. Not being able to do much stuff on the physical side, I’ll have to make good use of those skills that don’t depend on speed and power. I’ll come to that in a moment. Since it was I who damaged a joint by digging deep into overtraining, I’ll have to deal with the consequences. Those are, in my case, a massive reduction in physical activity and the loss of valuable training time. At least, when it comes to physical training.

My mother read a good book on time management lately (I can’t recall the name, though) and told me a great sentence she found there: „If you don’t have time for your health, you’ll spend lots of time on sickness“. Although this ain’t exactly applicable in my case, the concept remains the same. I didn’t take enough time to rest back then, so I’ll have to make up for it now.

Remember I mentioned making that statement about „using other skills“? The stuff about making the best out of my forced rest?
Well, here we go: My personal library experienced some substantial gains over the holidays. Now, I’m officially the proud owner of those books: 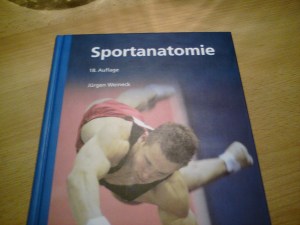 Now even if you don’t know a single german word, I guess you know what „Sportanatomie“ means. Weineck is a great writer, his book „Optimales Training“ (yeah, that’s „optimal training“) is one of the best when it comes to sport science literature.

Quite frankly, I don’t know a lot about either the book or the author, but the feedback on Amazon.com was great. 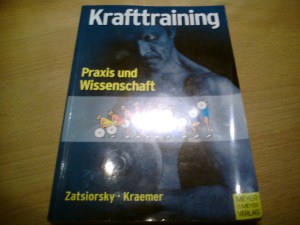 You might have heard about the author as well as the book (the original title is „Science and Practice of Strength Training“). When it comes to strength training, this former sowjet-union olympic coach writes the books. Excuse the pun.

Also, for those moments I won’t be educating myself on training and anatomy, I now have the book „The way of the peaceful warrior. A Book that Changes Lives.“ by Dan Millman.

As for the training, I’ll start doind the Chad Watebury program I’ve been following for some time again. I can do that with a plaster on my foot. At least, this will keep me from losing too much muscle.

The long term plan is to get the plaster done on 7th of january, have it removed in the second week of february and do physical therapy every day until the beginning of march. In march, I’ll have to do mostly cardio training (running if I can, certainly lots of swimming and stationary bike drills). This might seem surprising at first, considering my last posts almost exclusively deal with strength training. How does cardio fit in? Pretty simple. In april 2010, I’ll do my entrance examination for another instructor certification. The course I’ll be taking is called „instructor for overall bodily education“. In other words, I’ll be doing my state certification as a strength and conditioning trainer. To be admitted for the course, I’ll need to prove my own physical capabilities by running (quite a lot for my standards) and doing some (ludicrous) strength tests.

Reading through all of this, I guess 2010 ain’t going to be such a year after all. To say the least, it will definately be going to be an interessting year. From the start.

Since everyone is going to wish you a „happy“ new year, maybe a „merry“ or even „successful“ one, I wish you an informative, interessting 2010 and a lot of opportunities. Of course, I also wish you an injury-free year.

If you’re a martial artist already, keep on going. Follow your path, train and become stronger. If you’re not yet into martial arts… here’s one of those opportunities I was talking about. Why not find a suitable dojo and give it a try? Think about it.

Also, you’ve propably been training hard over the last year. Now, it’s time to party hard to celebrate the coming of a new one. I hope to have your attention again next year.