Yesterday night we returned from this year’s [open polish taekwondo championships in Czestochowa]. As expected of a [PUT] event, it was superbly organized. Everything went down smoothly with the exception of some misunderstandings regarding weight divisions, but this was also quickly taken care of and handled professionally.

The schedule had weigh-in on Friday night, semi-contact sparring on Saturday and continuous sparring on Sunday. Now at most tournaments, you can never be sure when you’re going to fight – I had days where I spent 10+ hours at the venue before stepping into the ring. That’s not so much of a problem by itself, at least if you know it in advance. What’s troublesome is having absolutely no clue as to when you’re up, because that means warming up again and again so as to be ready to compete at every moment. Good luck going through a fight after having warmed up like ten times or so. This time, despite the fact that more than 550 competitors from four countries (Poland, Wales, Austria and Azerbaijan) took part in the event, the promoters actually managed to roughly stick to the schedule. I knew that my division (-72kg) was on mat number 3 after the –66kg guys had finished. When the lightweight guys went at it, I went through the [Warrior Warmup Routine] to loosen up and stretch. In order not to burn out, I postponed intensive cardio warm-up up until my division was started. Since there were four fights scheduled before I’d step on the mat, I knew I had plenty of time. So, I worked the pads for a while to get into the right groove. From my point of view, this was probably the best warm-up I ever did at a tournament: intense enough to prep me for the fight yet easy enough so as not to tire me out. Of course, handling things this way was made possible be the great organization.

Just as in the [Open European Taekwondo Championships] last year, our team was made up of Chris, Frank and me. While Chris and Frank competed in semi-contact sparring, I did continuous sparring. Besides representing Austria as a competitor, I also served as team leader. The [PUT] guys really do a great hob to make foreigners feel at home at their tournaments – they awarded every foreign team with a special honorary medal. 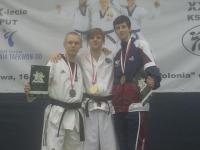 In terms of results, we did good, as usual: Both Frank and I scored a silver medal in our respective categories. Frank won two fights in the +185cm division, I fought my way through three bouts before losing to Waldemar Mielczarek in the finals. Overall, the level of competition was extremely high, the venue was crowded by National, European and World Champions. Obviously, I’ll be uploading the video material we shot over the course of the next days, along with a short analysis on each fight.

To sum things up: our performance was good, the event was great – but most of all, the whole trip was unforgettable! 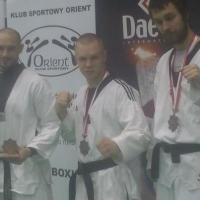 Stay tuned for some visuals,
so long,