Today’s master class was awesome. The trainer, Alex, really did a great job in adapting competition-proved Judo techniques to work in a no-Gi setting. 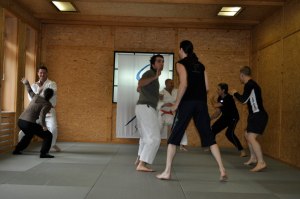 As most of us are absolute beginners in terms of grappling, we started the class with some falling exerices. Alex then transitioned into a double-leg takedown. I have to say that there’s a lot to this seemingly easy technique. Also, although the very same technique exists in every grappling system, I noticed that everyone seems to be doing it slightly different. For me, the Judo-approach with a vertical spine and strong shoulder pressure makes sense. Not connecting the hands was new to me, but with some practice, I’ll get that down too.

Having took down the partner, we practiced passing the guard, going from guard to side-mount. Again, there were some hints and tricks that were new to me, at least in this form. Personally, I consider the battle for a dominant position the alpha and omega of grappling, no matter which style. For a striker, the full mount is where he can bring his fists into play. A Judoka is probably happier with a strong side-mount position where he can pin the opponent. The finalizations, strikes, chokes, armbars, etc. are but a result of the battle for a dominant position.

From the guard, we did a relatively simple sweep, following the very same approach we took to passing the guard. I’ve seen that stuff done in Judo competitions, but never practiced it myself up until today. 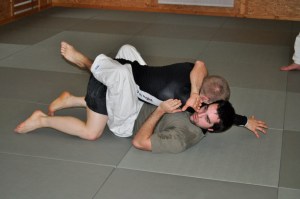 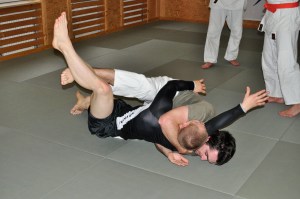 As you might have noticed, the exercises transitioned smoothly into each other. I really liked Alex‘ teaching style. Not too much, but everything strictly in context and thus instantly applyable. Doing the same thing from different positions is great. This way, students can truly concentrate on actually putting things to practice. Choosing a principle and adapting it to changing situations absolutely makes sense to me, as it is in fact the essence of Shinergy. Of course, every principle needs to be questioned thoroughly before being applied. This is particularly true in cases where some esoteric/ideolic principles are put above the base of all other principles: the laws of physics. This, however, was not the case. My elbows still hurt as a result of physically correct levers…

Anyhow, the class continued with a inward sweep (De-ashi-barai, I guess) from which we immediatly applied a straight arm bar (Juji Gatame). Alex showed us ways to defend against an ambar. The logical consequence was obviously learning to break that defense. From the guard, Alex showed us another armbar which I believe is pretty unique to Judo (Ude Hishigi Ude Gatame).

In the end, we practiced some hip-throws (O-Goshi). After approximately two and a half hours of falling and rolling, I can really say that I greatly enjoyed the experience. I will definately try to get Alex for another class soon. 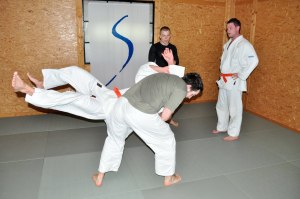 On a side-note, Dariusz, one of my teachers in Linz (at the BSPA), took part in the class, along with a friend of his, Chris. Those guys are experienced Judokas and both are strong as hell. Dariusz is a monster in terms of strength. After the class, he and Chris put the beast (my 48kg Kettlebell) overhead. I did it once and could never again repeat it. Those two humbled me by making it look easy.

Attached you fond some pictures to get an impression: 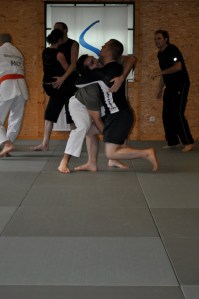 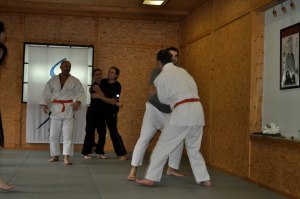 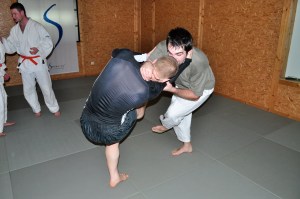 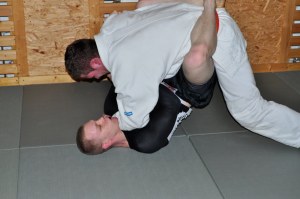