I just started my day with swimming.
It’s been both a pain and a pleasure. 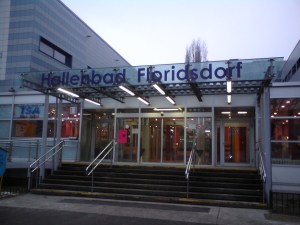 The routine:
I tend to keep my cardio workouts short and intense. Although what I do can’t exactly be called an „HIIT“ workout, I do employ a form of interval training. As a matter of fact, it’s all pretty simple (I said simple, not easy).

I got up at 6 and started my workput at 9AM, so that’s three hours for my joints to lubricate properly. Some tennis-ball work for my feet and calves loosened up the legs, which are pretty sore from yesterdays workout. To go to the bath it takes me about 12 minutes, which I’ve used for joint mobilization in the shoulders, elbows and neck.

Once at the pool, I warmed up with 10 lanes (25meters/lane) of breaststroke at a low to moderate intensity. After that, I did seven intervals of two lanes each. The first lane I’d go all-out, crawling, while the second lane was done by backstroke, at an easy pace. With seven intervals, that’s another 14 lanes at varying intesity levels. For cooldown, it was another 10 lanbes of breaststroke. If you do the math, that’s a total of 34 lanes. Not exactly a lot, but the sprints take their toll.

The whole workout, from stepping into the pool to stepping out again took me approximately 25 minutes. As a progression, I’ll add an additional interval each week while trying not to excess those 25 minutes. That won’t be possible of course once I reach 15 intervals, but I’ll handle with that when the situation arises.

The good:
First off, I consider swimming superior to running (assuming a comparable intensity and caloric expenditure) in terms of cardiovascular fitness. Not only is the whole body involved, it’s also much easier on the joints than having your whole bodyweight fall down on your ankle and knee for a couple of hundret if not thousand times while jogging. Also, you can always change to another swimming style to challenge different muscle groups.

Personally, I felt that especially the warmup/cooldown phase helped me handle the hangover from yesterdays workout (there being muscle soreness/stiffnes/pain) better. Also, I actually felt how more blood – and thus nutrients – was being transported through my veins to support the muscles. That’s a good thing.

On a sidenote, swimming is pretty cheap here – I paid ~18€ for a monthly ticket. At two workouts a week, that’s 9 workouts a month. Each workout therefore costs only about 2€. I know this calculation sounds strange, but if you depend on more than one training facility you better choose something that’s worth the money. For the joggers amongst you, don’t tell me that „jogging is free“. It ain’t. Unless you jog barefoot, naked (which, in fact, comes pretty close to what swimming is like). Proper running shoes and maybe one of those weird „running outfits“ (under armour, running jackets, protective goggles, …) don’t come free. A swimming short costs you very little and doesn’t wear out the way running shoes do. By the way, see above.

The bad:
Did I mention my muscles are sore and protest against every movement? The high intensity intervals haven’t really helped that. Also, I didn’t sleep very much tonight (about 6 hours, which ain’t enough for a 10-session training week), so it took some strong coffee to get me in shape to do just about anything. To make things worse, snow is falling as I’m writing those lines. I’ve never been quite the winter-type, so jumping into cold water after walking through snow ain’t exactly a pleasure for me. Neither is the way back through snowfall (after having spent half an hour in cold water).

The ugly:
I absolutely approve of swimming for therapeutical means. Also, for obvious reasons (if they’re not, read the above), I’d rather have people swim than jog. Therefore, I absolutely understand that the pool is being used by old people and/or people with health issues.

What I don’t understand is the utter lack of respect for others that seems to be predominant in this type of people.

Now the pool I swim in has nine lanes, four of which are designated warmup/cooldown lanes. The rest is reserved for active training (e.g. fast-paced swimming). I fail to see why a group of old women has to swim next to each other (rather than in one line) at a sub-minimal pace and take up all 4 warmup lanes. As they all swim at the same pace, it can’t be a problem to form a line and use one single lane instead of four. Hey, other people do that as well. You shouldn’t be chatting during exercise anyways.

Now you’ll be asking „what are you fretting about, man, if there’s nine lanes and four are used, that leaves you with five to go, right?“. Wrong.

Of those five remaining lanes, two are reserved for school classes. That leaves serious swimmers/athletes with a whoppin‘ three lanes to use. Of course, everyone on those lanes is doing things at his/her own pace, so it’s quite stressy anyways. Imagine one person warming up at a low pace and another one doing all-out crawl intervalls all at the same lane. That’s a receipe for disaster. Mix backstrokes into the equation (where you naturally don’t see much that’s going on on your lane) and you get aqua hell.

Having been a competitive swimmer back in the days, it just won’t cross my mind to do my warmup on the active swimming lanes. This decision, anyhow, leaves me trying to dodge/dive under/evade a line of constanty tattling grannies that can’t be bothered to form a line and adhere to common sense. Call me intolerant, but for a society to work – even if it’s only a bloody swimming pool – it’s crucial for everyone to respect not only his own necessities and goals but also those of his/her fellow men. Put into other words, one men’s freedom end where another one’s bondage begins.

The conclusion:
Wednesdays and saturdays are booked for swimming for the next two months. Having said all those things in the „bad“ and „ugly“ sections, I really believe that I’ll find a solution so I can do my thing without hindering/endangering others.

To give this post something of a moral lesson, next time you put your foot onto the mat at your dojo, think about how far you can take your own freedom without taking away that of your fellow martial artists.