At the end of october, the [TKDI European Championships 2012] will be held in Poland. That’ll be my first fight in Poland since 2007. On the team, there’ll be

In order to get down to -70kg, I’m following a diet based on [this idea]. You see, while I love the original Warrior Diet, it never worked for me in terms of weight loss. I feel that the changes presented by Maxwell make sense in my case. Still, I eat once per day, though – no changes here. I train with weights twice a week, following [Wendler’s 5/3/1] system, although with some tweaks. A summary of my actual routine can be found [here]. That means two high-carb, low-fat days, usually tuesday and saturday. The rest of the week it’s moderate-to-high fat. Obviously, it’s always high protein. Yesterday, for example, I had 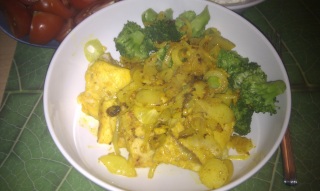 Now that’s what I call high-protein. Who ever said that low-carb can’t be fun?
Still, to tell the truth, I’ve come to enjoy regular carb feasts. Used to do a lot of low-carb in the past, but now, going deprived for three days straight just ain’t fun anymore.

Training-wise, I’m doing a lot of technique work, mostly with Chris. My last fights were inside a ring, whereas TKD is fought on the mat. Lots of pumping kicks and blitzing with punches. Proper boxing won’t play a particularly big role – also, it propaby won’t work due to the light gloves anyways. I’ve put up a compilation of yesterdays highlights (those were not necessarily the best shots – just the most spectacular actions).


Over the course of the next couple of weeks, I’ll keep you updated on every major thing that happens during the preparation – stay tuned!