Win some, lose some. This time, at the Night of Warriors 5.0, I’ve won. Not just any fight, but the title fight for the WMAC Austrian Amateur MMA champion in the 70 kilo division. In this article, I am going to cover the details of how exactly I prepared.

During fight camp, my weekly schedule consisted of nine sessions, on top of the classes I teach.

For the grappling aspects, I prepared at KaiGym Vienna, training under the ken eye of Luta Livre Black Belt Boban Bozic. On Monday and Wednesday, I can only take the AM classes, as I am teaching evening classes myself. As everything in life, training in the morning has some advantages while it also brings some disadvantages. On the one hand, classes are smaller in the morning compared to evening, so athletes get more one-on-one attention from the instructor. That is definitely a positive point. Also, especially during the final weeks of fight camp, Bobby and Georges were cool enough to really consider my preparation and tailor a lot of the classes to my needs (or at least, offer a lateralization when the concepts that were planned for the particular day did not necessarily apply to an MMA setting). In a larger group, that is much harder to do. On the other hand, most fighters work out in the evening, so I id did not always have sparring partners. Luckly, most of the time I had Patrick, who is a brown belt himself and a great training partner. On Fridays, especially early in the camp, I took both the AM and PM sessions to get seome harder rolling in. Now the thing is that while the Friday evening class is packed with high caliber grapplers, it is also very grappling specific (which makes sense in a grappling class, I guess) and not necessarily geared towards MMA competition.I did most of my striking training at the Shinergy Base Vienna, working with Shinergy Black Belt Elias and Shinergy Founder Ronny. The training mostly revolved around specific situational drills that we derived from watching videos of my opponents previous fights. Also, there was a heavy emphasis on padwork and energy system development (ESD). I will cover the progression of my ESD progression in a later section of this article.Saturday is traditionally the sparring session at my own Gym, Shinergy Stadlau. Considering the fact that most events take place on Saturday, that makes sense, I guess. I have some great fighters who helped me prepare for my bout, first of all Dominik and Johnny. While the former is a brilliant boxer who can really put on some pressure, the latter is an awesome allrounder and hence, was my go-to person for MMA style sparring. Usually, the sessions involved mixed-modality shark-tank sparring. For example, I would box with Dominik for a minute, have Johnny jump right in, wrestle (with punches and knees) with him for a minute and then have Dominik take a dominant position on the ground (usually the mount) and hammer me with punches. in one session, I was extra „lucky“ to have Felix, a friend of Johnny’s, visit the gym, so I took him into the rotation. Now I use parenthesis around the work lucky for a good reason. You see, Felix is a BJJ purple belt, so in a shark tank, after going hard with kickboxing and wrestling for two minutes, being in an inferior position against a superior grappler is the last thing you want. It just might be what you need, though. During the last weeks, Bobby set up some MMA specific circuits to emulate that intensity even when I did not have sparring partners that would crush me.

Monday and Wednesday I did some supplemental strength training, although these days were not set in stone. Actually, I tried to match the strength sessions to my hardest specific sessions in order to implement something like a high-low model, so I held the schedule somewhat reactive and adapted to what was going on on the mat.

In terms of ESD, I pretty much implemented Joel Jamieson’s recommendations from Ultimate MMA conditioning, although I did deviate to a certain degree, especially in the latter stages of camp. In September (before the actual camp), I did quite a few cardiac output sessions, keeping the average heartrate in between 120 and 140 bpm. I always did intervals, so I went well above that range for short periods. Steady state is just something I do not like and I have the evidence (progressive decrease in resting heartrate) that beneficial adaptations of the aerobic system do come with these intervals as well.

In October, I primarily did aerobic explosive repeats and some more cardiac output work. Building on that, in November I progressed to a cardiac power block and focused on caridac power intervals (CPI) and threshold training. I honestly hate CPI, but if nothing else, they sure build willpower. Basically, the idea is to raise the heartrate to the absolute max and keep it there for a certain time. This is even less fun that it sounds. I did the first sessions on the threadmill, sprinting at 22 kmh for 90 second intervals. Not impressive, but keep in mind I am a fighter, not a track and field athlete. 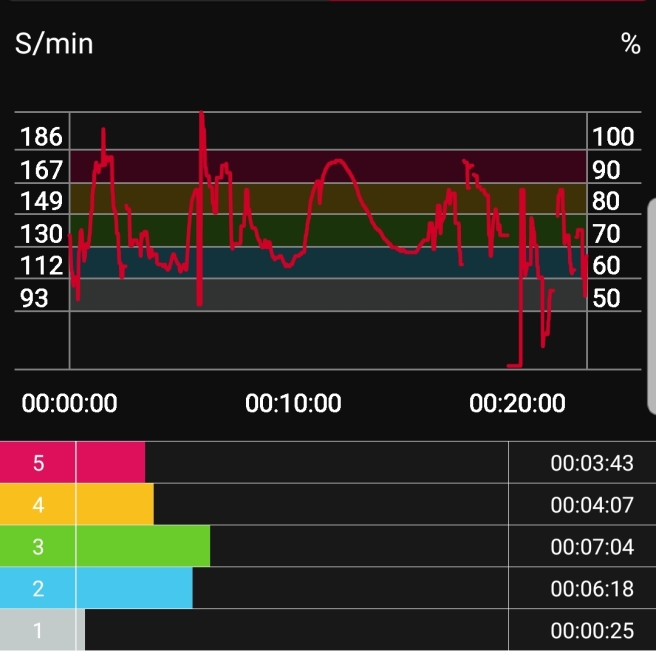 After a couple of these sessions, I progressed to more specific means and hit the pads at a pace that would shift my heartrate to the red zone for the better part of the round.

For threshold training, I monitored my heartrate during one of my sharktank sessions and used the average to approximate the threshold. This is a method proposed by Joel Jamieson and while it may not be overly precise, I intuitively believe it makes sense. Finally, during the fight speed block in December, it was a ton of threshold training, all done via drills, pads and sparring. Also, I tossed in some PCI sessions, to really push the pace.

All strength training sessions were performed as total-body workouts. I honestly do not believe that bodybuilding splits or even upper-lower splits have a place in a fighters routine, where so many competing demands need to be satisfied. I only had time to hit the weights twice a week, so a split would effectively reduce the training frequency for every muscle group to once a week. Greg Nuckols has presented evidence that for strength development, higher frequencies are superior to lower ones. Each session also included some explosive work. In October, that simply meant I would toss in a couple sets of cleans and/or power cleans as a 1A exercise. That that, I always had a lower body exercise, an upper body push and an upper body pull.

In order to keep it simple, I just went through a 5/3/1 cycle in October, leaving out the AMRAP sets and just doing the repetition targets. Specifically, I did

Very simple, really. In the last week, I pulled a 170 kilo deadlift, which is more than sufficient for the 70 kilo weight division.

After the cycle, I deloaded for a week and then progressed to a complex training routine that aims at converting absolute strength to strength-speed. Basically, complex training means doing a heavier exercise to elicit a post activation potentiation (which, according to my friend Benedict Mitter should probably be called post activation performance enchancement instead, as the underlying theories regarding physiological reasoning are most likely flawed) and then utilizing an increased muscle tone and cental nervoud system excitement in an explosive exercise. Although different trainers use different protocols to implement that type of training, there is a good paper in the Journal of Strength and Conditioning that provided practical guidelines which I adhere to. Again, these sessions were total-body workouts. The exercise selection was

Again, this is a very simple push / pull split. Following the recommendations by Dr. Carlo Buzzichelli, I kept doing that until the Wednesday before the fight. Of course, I dropped a ton of volume during that fight week, to taper down and allow fatigue to dissipate.

Bobby suggested I’d do a build-up fight to help get into the right mindset, so I decieded to participate in the ADCC Austrian Open on September 28th. That did not go very well, with me losing the first fight by a point against the winner of the division, but that does not matter – in the end, it was a build-up event that was only meant to get my head straight. On a sidenote, the KaiGym Vienna received the „best academy“ award, so it was a good day after all.

On fight day, everything went as supposed. Physically, I was in top condition. No injuries, no nagging pain, no adverse effects from the weight cut. Speaking of weight, the cut went perfectly smooth. I implemented the same tried-and-true protocol that I have so often in the past and again, it worked like a charm. You can find more information in this article. Ronny and Bobby both worked my corner, so I had the best coaches I could have asked for. Both are important people in my life, so I am really happy that they came along so well. Both displayed the highest degree of professionalism and made it clear at every moment that this was totally about me and my success. I’m honored and thankful to work with a team like this. Ronny, Mareike (who took the European Pro-Am K1 Title the same night) and I met at the Shinergy Base at 3:30 PM, to properly warm up and get in some rounds on the pads. From there, we went to the event venue, the Arena Nova. In terms of nutrition, I had proper breakfast, some Legal Cakes carbohydrate bars and liquid carbs. The drinks were home-made, implementing the peri-workout protocols suggested by Precision Nutrition. I had the last of these drinks around three to four hours before the fight, so I had full glycogen stores and zero GI issues. When it was time to fight, I was in a calm, deeply relaxed yet at the same time highly active state. You can call it „flow state“, I guess, or just claim you are „in the zone“, or whatever terminology you prefer. For me, I simply felt ready. The rest, as they say, is history.

If you are an aspiring fighter and need help with your fight camp, whether that be nutrition or strength and conditioning, do not hesitate to contact me.So long,don’t get hurt