Today me and my girlfriend went to the Health & Wellness Fair 2009.
In a cooperation with Kybun – exercise mats for rehab and therapeutic training – we were representing the Shinergy system.
Those KYbun mats are soft, bouncy and non-slippery. They can be used for proprioceptive training, stability work and the likes of it.
As I told the guys at the booth, they resembled a more expensive, more mainstream version of the tatami that cover the floor of my dojo.
Guess that makes me a „super-advanced kinesiologist“, since I’m having my students train on those mats every day. But then I guess it doesn’t, after all.

Now, the amount of visitors was far less than expected, so we’ve checked out the other booths. Quite frankly, I was pretty disappointed with the direction the terms „health“ and „wellbeing“ seem to be taking currently.
To quote Baird, a character from Epic’s videogame „Gears of War 2“ on this one:

„Anyone else’s bullshit detectors going off?“

Well, here comes the top 3 of what made me laugh the hardest:

1) Panasonic Joba
Now this one’s innovative. Basically, sitting on this robot simulates a riding a horse. The ad says something about strengthening your hip-flexors, glutes and core muscles. When I was reading this, all I could think about was heavy deadlifts. Well, never mind that one, but the whole thing reminded me of those tamagotchis and robo-dogs in an awkward way. In my opinion, horseriding should be involving, well, a horse. That’s why it’s called horseriding. Also, people need to stop thinking that the more money they invest in training equipment the better the results will be.

Hard work, a solid plan and being consequent about it is what leads to progress. There’s no shortcuts, as usually.
By the way you can find info about the Joba thing here: http://ex-blog.panasonic.co.jp/exhibition/en/2007/10/hcr_340.html

2) Spinalis
Those guys were trying to sell those fancy ergonomic chairs. Nothing wrong with that, I own a sitting ball myself.
Hoever, the video they were showing seemed to suggest that sitting on one of those things is actually good for your spine.
Which it obviously isn’t. We’re just not built to spend all day sitting.
Ergonomic chairs just might slow down posture deterioration and health issues, but there’s no way it’s going to improve health in whatever way.
My tips for a healthy spine would certainly revolve around heavy deadlifts, not some ergonomic gadget.
Don’t get me wrong, I totally believe in ergonomics, however, they’re a nice addition. In no way, however, can some sitting device replace hard work in the gym when it comes to spine & joint health. 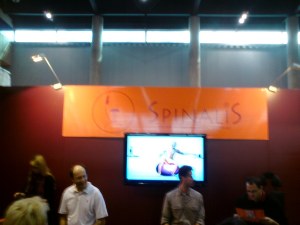 Weight loss, strength training and stability work, coupled perhaps with some propriceptive exercise is what will really work against back issues. Only when all those things are sufficiently taken care of do additonal measures make sense.

Now maybe I’m being ignorant and intolerant about those things, but I think that people really need to wake up when it comes to their health and wellbeing.
It’s not about flashy gadgets (Spinalis) and you’re most certainly not going to make progress if you refuse to leave your comfort zone (Pilates).

Bruce Lee’s most well-known and most abused phrase is „absorb what is useful. Dismiss what is useless“. I know, everyone’s using that phrase, more often than not in an inept way. Anyways, I’ll apply it to what I saw today: Dismiss everything that promises results without paying attention to the basics. It’s just not going to work.